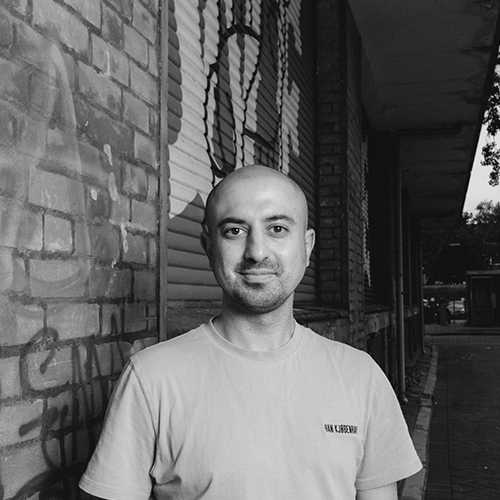 Mirwais Sarwary
Year: 2022
Mirwais came to the Netherlands as a child with his family as, and Dutch soon became his primary language, the language in which he did most of his speaking, writing and thinking. For a while he felt just like all the other kids in the Netherlands, yet his complex cultural background with Afghan, Azeri and Georgian roots was a source of confusion for Mirwais. After 9/11 everything changed, people saw him and treated him differently because of his Muslim heritage and how he looked. Perhaps that is why subconsciously, he often gravitates towards stories about outcasts, stories that question injustice, privilege, belonging and social structures that often define our existence.
Growing up, working in film didn’t seem like a tangible career choice to Mirwais. Until one day he got introduced to real filmmakers who inspired him to study filmmaking at LUCA School of Arts in Belgium. There he realized that his passion lies in connecting people with different talents and a joint vision, and building a platform for them to collaborate and create. His mission as a producer is to create an atmosphere of mutual respect where everyone is heard and treated fairly. In a nutshell, Mirwais describes his calling as “helping good people do good stuff”, it's as simple as that.
Being part of NPA changed him in unexpected ways. The program gave him confidence, insights into the Dutch film landscape, amazing network and friends for life. Working on the short at NPA creates space for trial and error. Mirwais says there is a difference between knowing and doing, it is most important to never doubt that you really have something valuable to say and work on it.
NextMadhiha DuynhouwerNext

Sign up to receive news of upcoming masterclasses, events and new programmes.

Become a part of the New Producers Academy

There is a one-time application fee of €15 (incl. BTW)

Before applying for the New Producers Academy Fellowship 2023, please read the requirements and review our Privacy Policy and FAQs. If you still have questions regarding the entry process, please feel free to reach out: hello[@]newproducersacademy.nl

We use cookies to ensure that we give you the best experience on our website. If you continue to use this site we will assume that you are happy with it.